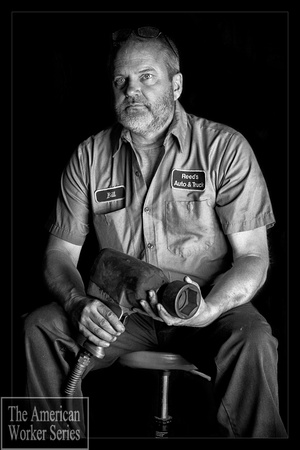 The American Worker Series
No. 17 "The Mechanic"

Bill Herrmann - From a young age, Bill Herrmann has been a mechanical enthusiast. His interests started at age 5 when he would take apart lawn mowers and plug sockets; constantly intrigued with "how things work".

Bill started his first business venture, a landscaping company at the age of 16. During the time he attended Harkness Career and Tech Center for automotive and diesel mechanics. Upon graduating, Bill travelled to Florida to attend American Marine Institute of Boat Racing, where he concentrated in marine mechanics. Bill then moved back home to work at a local marina in Buffalo, New York. He continued his servitude as a marine mechanic for several years; working with the majority of local marinas.

Bill soon acquired a job with the National Broadcasting Company (NBC) where he worked as a satellite uplink engineer. Mr. Herrmann travelled all over the country with the company, covering the majority of major national sporting events, including the Olympic games in 1996 and all Super Bowls involving the Buffalo Bills.

The demands of being on the road 264 days a year began to take a toll on Bill. He eventually left NBC to pursue a new business venture. He bought Reed's Auto Truck and Fleet services in 2002. Mr. Herrmann implemented his expertise in automotive mechanics and helped the company continue to grow. Over the years his company acquired large contracts with companies such as USF Holland and Sonoco Fuel Logistics.