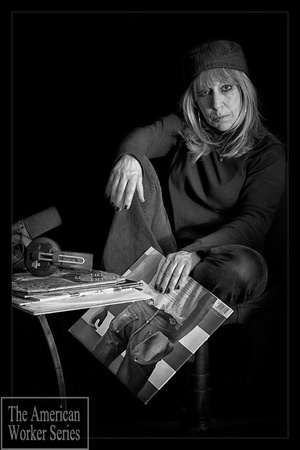 The American Worker Series
No. 12 "The DJ"

Anita West (97 Rock & WBFO) - Anita graduated with a degree in RADIO/TV/THEATRE from Ashland University. She began her radio career in Atlantic City, New Jersey before moving to Powerhouse Station WAAF - Boston, Massachusetts in 1986. Anita then went on to WHJY in Providence, Rhode Island. Moving to Western New York here in 1988 to work 10-3 on the newly revived 97 Rock, she currently hosts her own show on Saturday afternoons 2-6 on 97 Rock.

An avid supporter of local music, Anita can be found every Thursday hosting Thursday Night Blues at Central Park Grill in Buffalo, NY.

She is also well known for her ever popular Blues show on NPR ON WBFO Sunday nights 7-12.
©2013 Photography by GreatLook.
User Agreement
Cancel
Continue