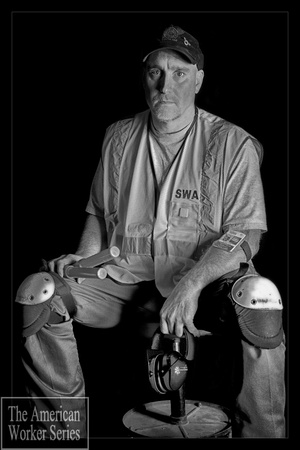 The American Worker Series
No. 19 "The Airport Ramp Agent"

Kevin Downey - Kevin left the Buffalo area in 1994 after obtaining a two yr. degree. Settling in Las Vegas, he became a personal trainer until the company cut his hours in half. A client mentioned an airline was looking to hire and that started Kevin in his ramp agent career.

Long hours, early mornings or late night shifts, sweltering sun in Las Vegas or snowstorms in Buffalo, and cramped bin locations too small for a six foot tall guy, are just part of the job. The knee and shoulder surgeries can't stop the airline worker...it's all part of this physically demanding job. He simply works through it.

At the end of his shift, it is time to pick up his four children from school. He often has to make several trips back and forth to their catholic school so they can participate in activities.

He has been dedicated to his airline for nearly 20 yrs., his wife for 25 yrs., and his children for 15 and counting.

Kevin can often be found coaching his son's baseball teams, watching his daughters' softball games and dance competitions, as well as on the Judo mats himself.
©2013 Photography by GreatLook.
User Agreement
Cancel
Continue