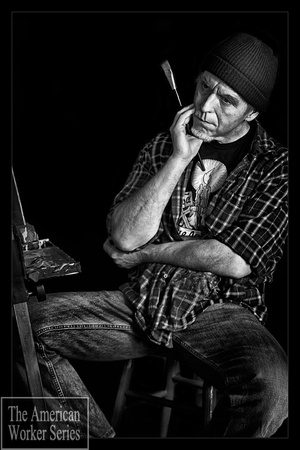 The American Worker Series
No. 7 "The Artist"

Sean Madden - Sean's insanely surreal art has been published and exhibited all over the world. Sean grew up in Buffalo, then moved to Rochester in the 80's. He has a masters degree in Counselor Education, and has been making and selling art for many years -- everything from children's books to oil paintings to dark surrealism.

To date, he's been published in the UK, Australia, Canada, Puerto Rico and throughout the US.

He specializes in very surreal, highly detailed pen and ink works and also acrylic and oil paintings. Two books of his works are now available through Verboten Books.

Sean had two careers: one as a successful counselor with children and adolescents -- the other as an illustrator and fine artist. Very respected in both careers, but because his art was non-mainstream and unconventional, he never let one world know about the other.

Then it all came to an end... A conservative group of parents found out about his website, and despite a spotless work record and many accolades, he was placed on administrative leave in May of 2012. Nothing illegal -- only a speeding ticket his entire adult life. It's likely this will drag on for many years. It's a case that is relevant to anyone who works a conservative day job, but has an alternate lifestyle privately.
©2013 Photography by GreatLook.
User Agreement
Cancel
Continue