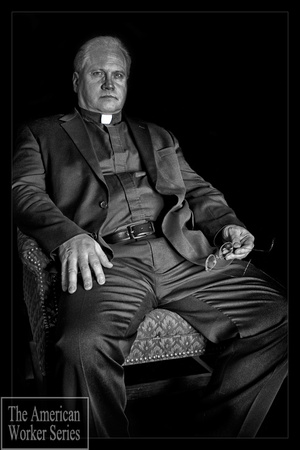 The American Worker Series
No. 5 "The Priest"

Father Ted Jost - Rev. Edward "Ted" Jost was born in Kansas City, Kansas on February 15, 1961. When his father, a college English professor, obtained a position at Canisius College in Buffalo, his family moved here in 1964. Rev. Jost suffered from a bone condition and was hospitalized for much of the first five years of his life. Feeling called to serve as a Roman Catholic priest from age eight, Fr. Jost demonstrated an artistic talent from an early age. A writer, visual artist, and actor, he excelled in dramatics in high school and later attended Niagara University to discern both these vocations. After graduating from Niagara with a BA in English (and)with a concentration in Theatre Studies, he attended USC in Los Angeles and, after four years there, he moved to New York City, working as an actor in regional productions across the country. Throughout this time, he attended "discernment retreats" with religious groups and kept praying about the priesthood. After eight years "on the boards" he decided that this lifestyle was not for him and he moved back to Buffalo. After briefly considering a teaching career, Fr. Jost began to contact various religious orders and the Diocese of Buffalo about entering a seminary and bringing his discernment to a higher level. Five years later he was ordained a priest for the Catholic Diocese of Buffalo and has served for the last 17 years as a priest in Western New York, from the Tonawandas to Elma.
©2013 Photography by GreatLook.
User Agreement
Cancel
Continue