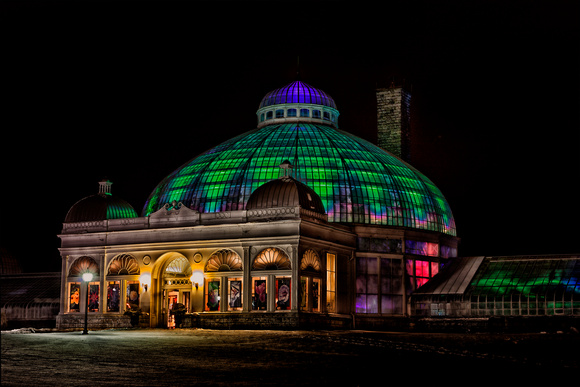 This is an original print that I photographed. This photograph is of The Buffalo and Erie County Botanical Gardens in Buffalo, New York.

In 1868, the city of Buffalo Parks Commission started meeting with landscape architect Fredrick Law Olmsted, Sr. (1822-1903) and Partners. He was known for his work as chief architect ofNew York City's Central Park and designer for Brooklyn's Prospect Park. For Buffalo, he designed a park system including The Park (Delaware Park), Parade (Martin Luther King Jr Park) and Front Park with connecting parkways and circles. Buffalo was the first American city to undertake this unique concept. Buffalo became Olmsted's model for other cities to follow in creating beautiful cites and residential districts interlaced with large and small recreational areas. Olmsted's designs for Buffalo's Park System were exhibited at the 1876 Centennial Exposition in Philadelphia, described them as showing "the best planned city as to its streets, public places and grounds in the United States, if not the world." These designs made Olmsted world-famous leading to his commisions for his later work: Boston's "Emerald Necklace", Chicago's "Riverside" Community, Yosemite Valley, The Biltmore Estate, and Niagara Falls Reservation. His ideas influenced urban beautification throughout the nation including creation of The Mall in our Nation's Capital (Washington DC).

South Park was created in 1894-1900 from 156 acres of farm land. The conservatory was included to showcase tropical plant species while the rest of the park was designed to feature the more hardy temperate species including an Arboretum (collection of trees), a Pinetum (collection of evergreens), a Shrub Garden and a Bog Garden. The formal gardens around the conservatory were designed to lead visitors into the more informal park along many walking paths. The park also included a large pond for boating, a ring road for horse carriages, and a meadow. The walking paths as well as a boat house and bandstand were never completed.

The tri-domed glass, wood and steel building was designed by the premier conservatory designers of the time: Lord & Burnham, Co. from New York's Hudson Valley.

The construction methods were based upon the famous Crystal Palace and Kew Gardens Palm House in England. When the conservatory was built in 1897-1899, it was one of the largest public greenhouses in the country (at a cost of $130,000). Today there are less than a dozen large Victorian conservatories in America and ours is one of two with the tri-dome design along with the New York Botanical Gardens in the Bronx.

All 8x10, 11x14, 16x20, 20x24, 20x30 prints are produced using use a traditional photographic process. Printing is on real photographic paper which is exposed with light and then run through a chemical process, on Kodak Endura Professional Paper. (Read description on other items)