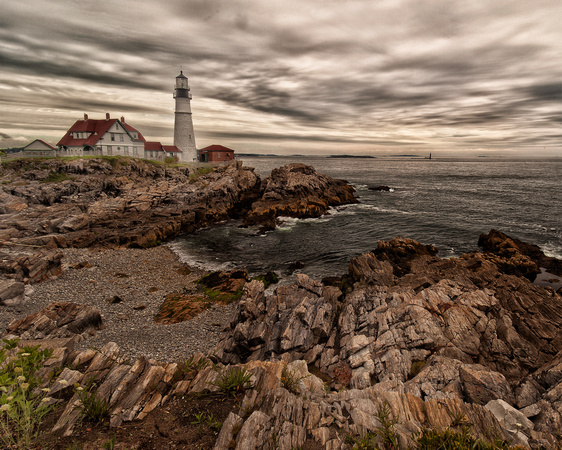 This is an original print that I photographed. This highly detailed photograph of the Portland Head Lighthouse in Cape Elizabeth, Maine. This photo was taken on a very overcast day giving the photo a very moody, eerie and dark feeling.

Portland Head has long protected Portland and the adjacent area. Cape Elizabeth residents were deeply committed to American independence from British rule. In 1776, the new Town of Cape Elizabeth posted a guard of eight soldiers at Portland Head to warn citizens of coming British attacks.

In 1787, the General Court of Massachusetts (the Massachusetts legislature) provided $750 to begin construction of a lighthouse. In 1790, when the United States Government took over the responsibility of all lighthouses, Congress appropriated $1,500 for its completion. The original tower measured 72′ from base to lantern deck and was lit with 16 whale oil lamps. It was first lit on January 10, 1791.

Construction of the first Keeper’s Quarters began in 1790 as the result of a contract signed by Massachusetts Governor John Hancock. A one story dwelling built to replace the first keeper’s house was erected in 1816. It measured 34′ x 20′ with two rooms, a cellar and a porch in the rear.

By 1864 a 4th order Fresnel lens and a cast iron staircase were installed.

By 1865, the tower was raised 20′ and a 2nd order Fresnel lens was installed. A portion of this lens may now be seen at the Museum at Portland Head Light. Except for a period between1883 and1885, this lens was in the lighthouse until 1958.

Late on Christmas Eve in 1886, the three masted bark Annie C. Maguire struck the ledge at Portland Head. Keeper Joshua Strout, his son, wife, and volunteers rigged an ordinary ladder as a gangplank between the shore and the ledge the ship was heeled against. Captain O’Neil, the ship’s master, his wife, two mates, and the nine man crew clambered onto the ledge and then to safety . The cause of the wreck is puzzling since visibility was not a problem. Members of the crew reported they “plainly saw Portland Light before the disaster and are unable to account for same.”

The current Keepers’ Quarters building was constructed in 1891 as a two story duplex. Until 1989, it was home to the head and assistant lighthouse keepers and their families.

Portland Head Light was the responsibility of the United States Department of the Treasury from 1790 to 1852 when management was transferred to the US Lighthouse Board. The Board was reorganized into the Bureau of Lighthouses in 1910. In 1939, aids to navigation became the responsibility of the United States Coast Guard. On August 7th, 1989, Petty Officer Davis Simpson struck the US flag for the last time at the decommissioning ceremony recognizing the automation of the lighthouse. The property was leased in 1990 to the Town of Cape Elizabeth. Three years later, through the efforts of United States Senator George Mitchell, the property was deeded to the Town. The United States Coast Guard maintains the actual light and the fog signal, but the remainder of the property is managed by the Town of Cape Elizabeth.