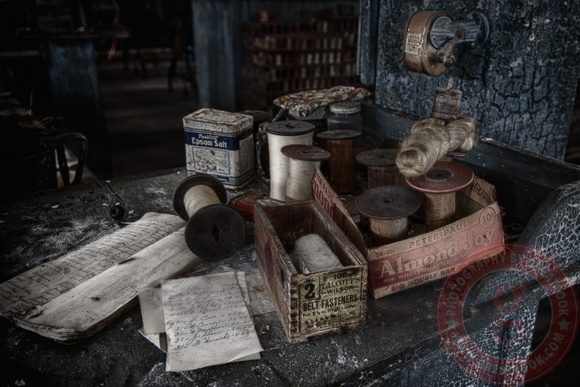 The remote hills of Western Maryland is a place far from the major population centers of the state and where geography is more important to life than state boundaries. This former frontier wilderness shares the Allegheny coal fields, life style and values with West Virginia and Pennsylvania. In the early 20th century the coal mines provided most of the employment for the men of the region. In 1907, taking notice of the cheap and abundant labor pool provided by the wives and children of these miners, the Klotz Throwing Company built a silk throwing mill in the town of Lonaconing, Maryland. For fifty years the clatter of the mill could be heard throughout the town as it produced silk thread from raw silk imported from Japan.

On a Friday in July, 1957, the workers went home but when they returned on Monday they were locked out due to a labor dispute. The mill never reopened.

I had the pleasure of photographing this time capsule in March of 2014.

The most intact site I've ever photographed complete with calendars on the wall from the last days of production in 1957. Company employee records, shoes, clothing and many period artifacts are just all over this place.