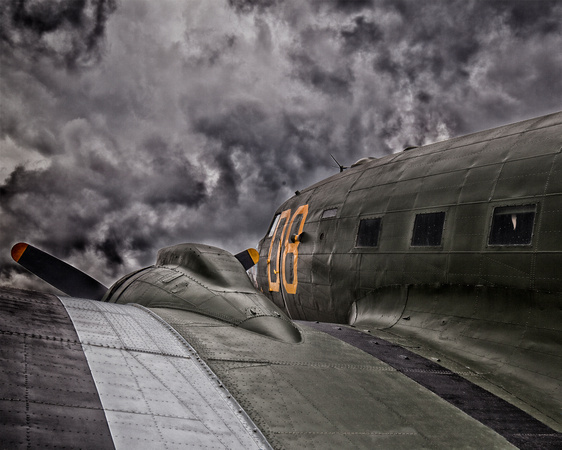 This is an original print that I photographed. This photo was taken at an air museum in Canton, Ohio. The aircraft is a Douglas C-47 Skytrain.

The C-47 was vital to the success of many Allied campaigns, in particular those at Guadalcanal and in the jungles of New Guinea and Burma where the C-47 (and its naval version, the R4D) made it possible for Allied troops to counter the mobility of the light-traveling Japanese army. Additionally, C-47s were used to airlift supplies to the embattled American forces during the Battle of Bastogne. Possibly its most influential role in military aviation, however, was flying "The Hump" from India into China. The expertise gained flying "The Hump" would later be used in the Berlin Airlift, in which the C-47 would play a major role, until being replaced by the C-54.

In Europe, the C-47 and a specialized paratroop variant, the C-53 Skytrooper, were used in vast numbers in the later stages of the war, particularly to tow gliders and drop paratroops. In the Pacific, with careful use of the island landing strips of the Pacific Ocean, C-47s were even used for ferrying soldiers serving in the Pacific theater back to the United States.