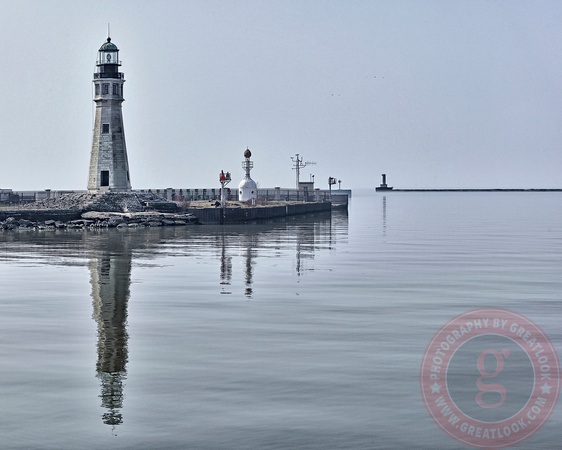 This is an original print that I photographed. This photograph is of the lighthouse in Buffalo, New York on Lake Erie.

Built in 1833, the Buffalo “Chinaman’s Lighthouse,” is one of the oldest lighthouses on the Great Lakes.

The walls of the tapered octagonal limestone tower are 4 feet thick at the base and rise to a height of 44 feet. The lighthouse stands on a stone pier which was originally constructed in 1820, thus providing since that time a sheltered harbor for the city of Buffalo and accomplished through the efforts of several prominent Buffalonians including Judge Samuel Wilkeson who was also one of Buffalo’s early mayors. The lighthouse is the oldest structure in the city standing on its original site and not altered for other use.

Two stories emerge about how the lighthouse gained its nickname, “Chinaman’s Light”. One, the more obvious to the eye, is the fact that the top of the lantern housing looks like a Chinese coolie hat. The other, which tends to be more historical, is that a pagoda-like wooden lookout tower stood adjacent to the lighthouse for many years, from which illegal immigrants crossing from Canada, including the Chinese, were monitored and apprehended. This tower, complete with a hanging light, was long familiar to the crews of Great Lakes vessels and when the tower was eventually torn down, the name of “Chinaman” was transferred to the lighthouse itself.

In 1914, the lens was removed and placed in the outer harbor breakwater light which was more visible to lake traffic. The lighthouse was threatened with demolition, but was saved and restored in the late 1950′s.