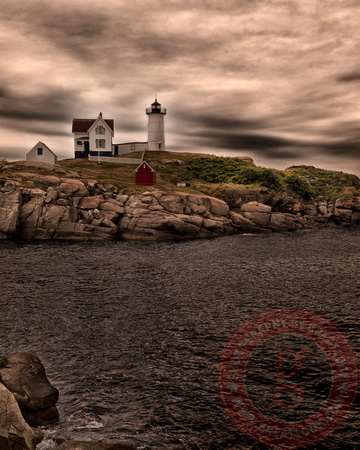 This is an original print that I photographed. I photographed this lighthouse on a recent vacation along the East Coast. This highly detailed photo is of The Caped Neddick Light, also known as York Nubble or Knubble Light, and Cape Neck to locals in Maine. The lighthouse is located in York, Maine. This photo was taken on a very overcast day giving the photo a very moody, eerie and dark feeling.

The main house is a two story, six room structure consisting of a dining room., kitchen, pantry, living room, laundry room, three bedrooms, and a single bathroom. The house is built in the shape of a cross and is positioned so the roof points indicate north, south, east and west to assist the lighthouse keeper in times where direction was important.

On the north side of the main house within 50 feet of the water sits the boat house of the Nubble Lighthouse property. There are two rails that lead from the boat house to the low tide water mark. Between the boat house and main house there is a long flight of stairs and wooden ramp.

The Nubble Lighthouse also has a very interesting item on the island. There is a basket which is attached to a cable that extends from the mainland of Cape Neddick Maine, to the Nubble Lighthouse island. The trolley system consists of a good sized wooden box that is suspended on a thick metal cable which runs form the island to the mainland. The trolley system was used by the Keepers to transport groceries and supplies over the water for the lighthouse keepers.